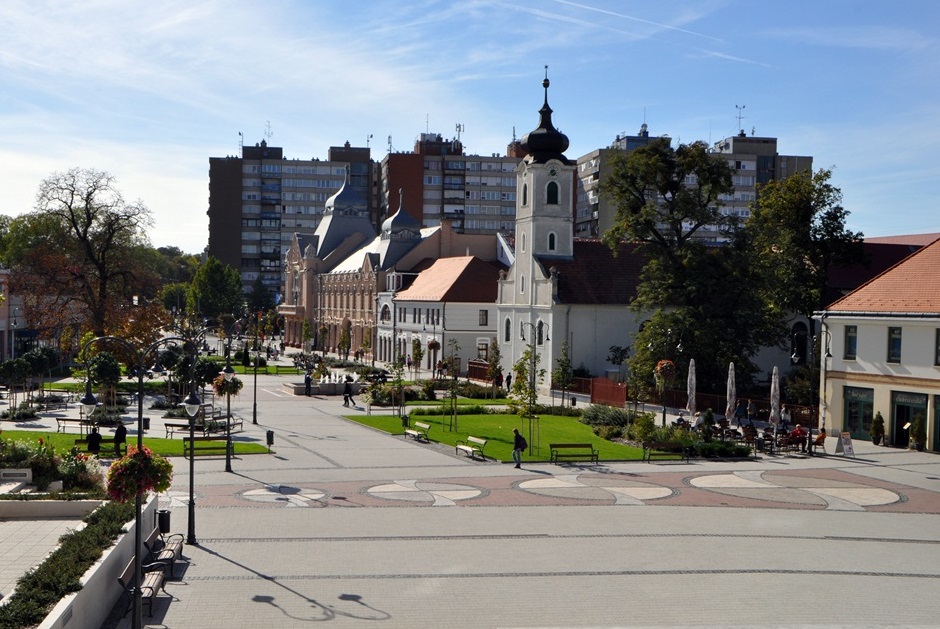 In 2012 the organising committee of the ‘For a Hungary in Bloom’ competition and Hungarian Tourism Plc awarded Gödöllő’s regenerated main square with the designation ‘Hungary’s Most Beautiful Main Square’ . The assessment involved a total of 298 locations. Every year the organising committee and Hungarian Tourism Plc highlight a tourism-related theme, which in 2012 focussed on local high streets and main squares. The jury concluded that in the ‘Town’ category Gödöllő had the most beautiful main square. In the appraisal acknowledgement was given to the investments made in Gödöllő over the previous years, which have been accompanied by the development of significant green areas, including the revival of the Royal Palace’s garden and the refashioning of the main square implemented on a “really high European standard” . In addition to the regeneration of public spaces and buildings, the competition included assessment of the quality of green areas, the neatness, cleanliness and sustainable environment-friendliness of localities, as well as the cooperation between the local authority and civil society organisations . Besides the ‘Hungary’s Most Beautiful Square’ award, Gödöllő has also received acknowledgement from the Green City Movement , which has offered its environment protection guidance to the town. Since September 2013, free Wi-Fi has been available in the town’s main square. No password is required and anyone can access the internet with their notebook or smartphone. With the improvement of Szabadság Square a public space suitable for relaxing and richly provided with green areas and Baroque elements has been created, which harmonizes wonderfully with the green belt surrounding the town.

Following reconstruction, the focal point of the square is now the Calvinist Church , the unique atmosphere of which is highlighted by special lamp standards a nd floodlighting. In relation to the former, an archetype has been developed which was so successful that it has become known as the ‘Gödöllő type’ design . A restrained fountain with natural stone elements has been installed in front of the church. It is lit by 13 underwater LED lamp units, which produce a fabulous atmosphere in the square during the evening hours. The fountain’s unique design, ornamentation and water spouts were designed by the sculptor Jolán Mihály. The square also has an interactive fountain with five jets . The copious, frothy water emerging from each of these is lit by four underwater lamps with changing colours. The fountain isn’t just a simple sight in the refashioned square. It offers great amusement for passing children, toddlers and older ones alike, in that it gives the possibility of an entertaining contest . Next to each jet there is a sensor, which when jumped on alters the jet of the water’s height and the colour of its lighting. From two or more competitors, the winner is the one whose column of water shoots the highest.

As a gift from Indonesia to Hungary and for the first time in Europe, the monument proclaiming the worldwide friendship of peoples was erected in Gödöllő’s main square. The World Peace Committee established the gong , which is decorated with the flags of all nations, the symbols of world religions and a map of the world’s oceans, as a memorial to the 200 people killed following a series of explosions in 2002 in Bali, Indonesia’s tourist paradise . The committee offered it to Hungary in 2007 in recognition of advances in civilisation, technology and economy, as well as the successful assertion of peaceful social relations. The 150-kilo, 2-metre diameter bronze monument is the work of Indonesian sculptor Djuyoto Suntani and was inaugurated on 2 May 2007. The story of the gong can be read on the black marble plaque placed in front, and the small park around it contains plants typically found in the tropics.

With its façade of noble simplicity and its nicely-curving onion dome, the 260-year-old church of Gödöllő’s Calvinists stands among the buildings of the main square. The patron of the church was Antal Grassalkovich I , who had the old Calvinist church which stood in the grounds of today’s Royal Palace demolished. He donated land in the centre of the town, plus building materials and money for the new Baroque church, which was consecrated in 1745. Over the years the church has been renovated several times. In 1912 the original painted wooden ceiling and loft were replaced with concrete, and a long period of restoration work followed the serious damage resulting from the church being hit by a bomb in 1945. The tower was renovated in 1993.