Royal Palace Museum of Gödöllő is open for guided tours, special events and group booking. Visitors can enjoy 26 rooms and can get insigth in the two main period of the palace.

The village Calvinist church originally stood on the site of the palace church, but this was demolished on the orders of Antal Grassalkovich I as he planned to erect a richly decorated Catholic church adjoining the Palace. The church was consecrated on 16 May 1749. Its patron is St John of Nepomuk as depicted in the high altar painting dating from the 18th century. The baldachin above the high altar rests on four black marble columns. The triumphal arch is decorated with the Grassalkovich family coat of arms. A unique feature of the church is that it has two Rococo style pulpits. Above the entrance to the oratory there is a Venetian mosaic portrait of Antal Grassalkovich I. The church has kept parish registers since 1769, and has functioned as an independent parish church since that time. 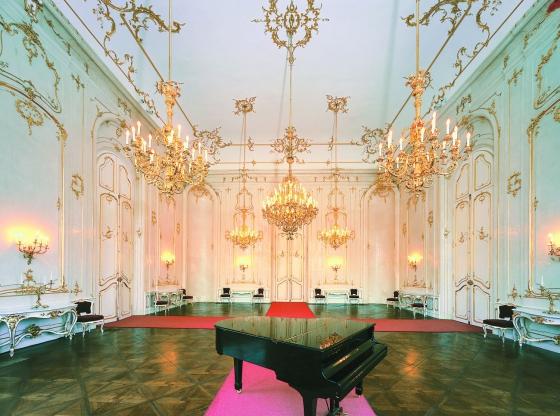 The royal suites
The second golden age of the building began in 1867. Bought and reconstructed by the Hungarian state, the palace was presented as a coronation gift to Emperor Francis Joseph I (1830–1916) and Queen Elizabeth (1837–1898) for use as a residence. The royal period is evoked in 14 galleries: the faithfully restored royal suites and the ceremonial hall. 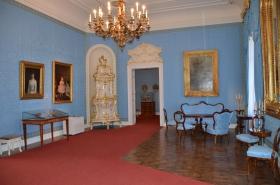 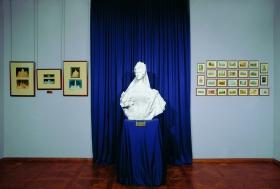 Queen Elisabeth's life
The rooms of the violet suite were reconstructed in 1996 based on authentic sources. Beautiful portraits of the Queen can be seen on the walls, together with portraits of the most outstanding politicians of the age who Elisabeth had been in contact with in preparation for the Compromise of 1867. In the writing room we can get to know Elisabeth’s Hungarian language and history teachers, while the dressing room gives us a picture of her favourite pastimes: travelling and horse riding. In the bedroom hangs a full-length painting of Maria Theresa, just as it was in the time of Antal Grassalkovich I, who had the Palace built.
The next rooms in the suite, the reading room and the quarters of Ida Ferenczy, the Queen’s Hungarian reader, house the Queen Elisabeth Memorial Exhibition with relics connected to the cult surrounding her person.
The secret spiral staircase between the bedroom and the reading room led to the three-room suite on the ground floor, decorated with stucco. (The spiral staircase cannot be reconstructed, though its location is marked in the room leading to the air-raid shelter.)
Just before Elisabeth arrived for a visit to Gödöllő, gardeners would always plant her favourite flowers in the front garden: violets and pansies. In the finely restored front garden are the gravestones of two of the queen’s favourite dogs. The front garden is accessible through the wooden veranda. The wooden veranda was designed by court architect Ferdinand Kirschner. It was presumably dismantled following  the queen’s death. Queen Elisabeth’s porch was rebuilt in 2010 in accordance with the original designs.