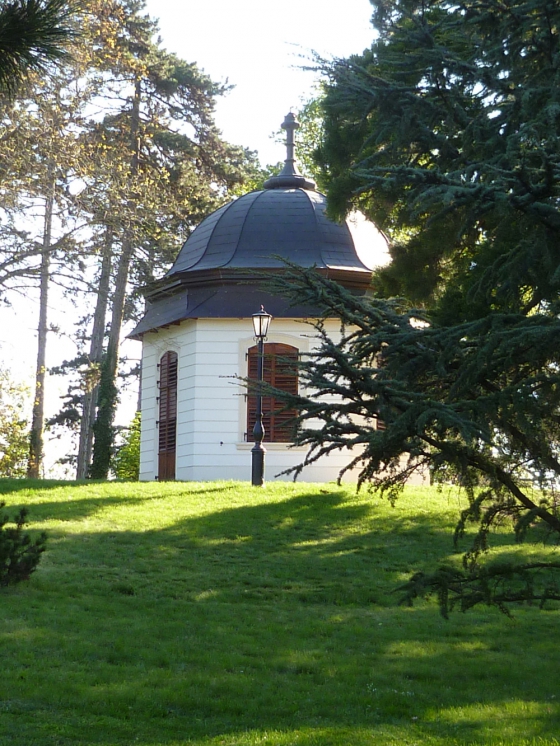 About 200 metres from the main building of the palace , on the north-west side of the garden, there stands a Baroque pavilion on top of a small hill. The Royal Hill Pavilion was constructed during the two decades following the 1751 visit of Maria Theresa and before the count’s death in 1771. In all probability, Antal Grassalkovich was present at the 1740 coronation of Maria Theresa in Pozsony (today Bratislava). Thus he witnessed the queen in her coronation attire gallop up the royal hill as part of the traditional coronation ceremony to wield a sword as a sign of her readiness to defend the country from adversaries, from whichever direction they might attack.

With the construction of the Royal Pavilion and its interior decoration Grassalkovich simultaneously glorified his sovereign, the nobility and himself, by highlighting the interdependence of the monarch and the Hungarian nobility, his own willingness to make sacrifices and his unconditional loyalty to his sovereign. The garden pavilion, which was built on an artificially created hill, has a regular hexagonal groundplan, an interior diameter of 6.5 metres and walls 3.2 metres high. The walls are broken by four windows and two doors opposite each other. Inside there are portraits of Hungarian leaders from the time of the Conquest, as well as Hungarian monarchs .

During the 1810s, when Leopoldina Esterházy, the wife of Prince Antal Grassalkovich III , had the garden refashioned as a landscaped garden, o nly the Royal Pavilion was left untouched . The unknown designer of the new garden adapted the pavilion to the structure of the landscaped park, determining its positioning and role to this day.

After the battle of Isaszeg on 6 April 1849 , the defeated, retreating imperial army in fury cut the pictures in the Royal Pavilion to pieces with bayonets , presumably regarding them as symbols of Hungarian statehood. Later, in 1857 the then owner of the palace, Baron Simon Sina , who was of Greek descent, anticipating a visit of Franz Joseph to Gödöllő , not only had the main building restored but also rescued from destruction the monument in memory of the legacy of Hungarian nobility. He had the pavilion repaired and replaced the damaged portraits. Ten years later when, following the coronation of the Emperor as King of Hungary, the Hungarian government purchased the Gödöllő palace and its surroundings, and presented them to the royal couple as a coronation gift, the park became an important scene of court life, within which the pavilion was a focal point of orientation in its network of pathways.

In the 20th century, possibly during the First World War or the subsequent revolutions, the pavilion was damaged, but it is possible that when the main building was rearranged as the Regent’s residence the images of monarchs were removed. In fact in the interwar period they were held by the Queen Elizabeth Memorial Museum, which had been established in the Buda Royal Palace. After the Second World War 14 of the pictures ended up in the Historical Picture Gallery of the Hungarian National Museum , by which time their place of origin in Gödöllő had been forgotten . Later, the art historian Dr. Ferenc Dávid managed to identify them. As for the pavilion itself, in all probability its survival can be attributed to the fact that it was part of the land confiscated for the military and surrounded by a fence, thus in practice it was inaccessible for anyone with an idea of getting their hands on its bricks for building material.

The building was renovated in 2002 on the basis of plans drawn up by Zsolt Máté and Zoltán Szabó, the damaged parts being restored in line with photographs taken in the 1890s. In 2004, with the help of surviving paintings, The Illustrated Chronicle , The Book of Monarchs and other pictorial sources, t he royal portraits were created anew by photographer József Hapák and graphic artists György Filakowszky and Balázs Szendi , since when the former jewel of the Royal Park has been open to the public .


Open to visitors:
You can visit museum tickets and guides.
Click here for more information!