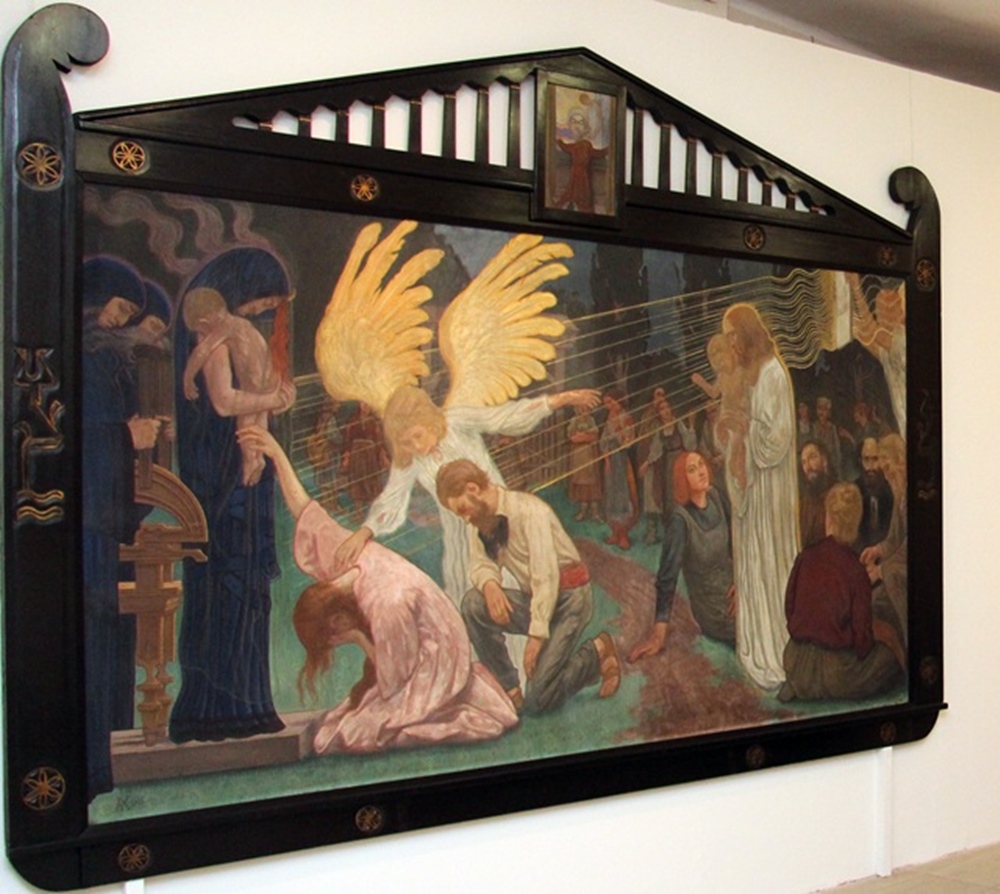 At the beginning of the 20th century the Art Colony of Gödöllő was the centre of Hungarian secession and as such it was famous all over Europe. The Art Colony was established by Aladár Körösfői Kriesch who moved to Gödöllő in 1901. He was followed by more and more artists, including Sándor Nagy, his brother-in-law, and they worked as industrial designers, painters and graphic artists.

The main concepts of the Art colony were respect of the country, love of family and traditional beliefs, and based on these, to renew art. Their main scope was to unify art and handicraft to create an art that, feeding from the folklore, would take the role of the bourgeois art.

A central role was assigned to the weaving school established in 1904. With the help of Leo Belmonte , the director of the school, local girls were soon acquiring the art of tapestry ( a special weaving technique called "gobelin" ).
From 1907 the Hungarian University of Art and Design made the school its apprentice workshop and with the help of Rózsa Frey a production process was started.

All this attracted a number of artists to Gödöllő: Árpád Juhász, István Zichy, Endre Frecskay, Carla Undi, Ferenc Sidló, Jenő Remsey and Ervin Raáb are artists who moved to or rented houses in Gödöllő .

Members of the Art Colony were followers of a green way of life : they were vegetarians, wore revolutionary new clothes and found it extremely important to be physically as well as spiritually fit: they pursued various sports regularly and often had reading and musical events. They were the designers of their own homes and clothes. They also designed the toys, story books of their children and thus they became important artistic educators.

They concentrated on the notion of a collective art: weaving, sculpting, working with leader, stained glass designs, murals and graphic designs were all close to the members of the Colony.

The artistic ideal as to create the national art based on the folklore , to create a new decorative style bore the Hungarian secession . As a result of their long journeys to the villages all over Hungary, their works - stained glass windows, murals, paintings and carpets - all bear the motifs coming from Hungarian tales and legends.

After the outbreak of the first world war the Colony was evacuated and short after Körösfői Kriesch died, it was closed. Sándor Nagy and Jenő Remsey Jenő remained in Gödöllő until their death and directed the works in the weaving school which, in the meantime, was nationalized.

In honor of the important cultural activity that the Art Colony fulfilled in Hungarian culture, they were awarded the Magyar Örökség Prize ( Hungarian heritage prize ) in 2005. The prize was presented to and kept by the Town Museum Gödöllő.

The Secession itinerary is designed to drive you around and introduce these places to the visitor. The itinerary is available at the Town Museum Gödöllő. See: Thematic itineraries.

The artistic life and works of the Art Colony is introduced in an exhibition on secession in the Town Museum Gödöllő.